Airport of the Year Award 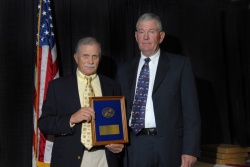 Award Presentation
According to Airport Supervisor Bobby Bateman, this is the first time, to his recollection, that the Airport has received this award. He explained that the award was presented at the end of the Texas Aviation Conference hosted by the TxDOT Aviation Department. “Thursday night is the banquet where they give out six or seven awards and we got one of them,” he remarked. The award, framed in wood and matted on blue velvet, contained a TxDOT medallion on a small, engraved plaque.

Aviation Directors Speech
Bateman accepted the award from David Fulton, TxDOT’s aviation director, who shared with the evening’s audience a brief history of the airport as well as its recent improvements. “There’s 389 airports that TxDOT supports, funding-wise,” Bateman explained. “We were fortunate enough to have a thoughtful and progressive City administration and a capital improvement grant. I’m sure they (TxDOT) know there’s going to be growth in this area in the future."

Words of Wisdom from Mayor Holliman
“We’re very elated,” remarked Mineral Wells Mayor Clarence Holliman. “I think it shows the tremendous work and dedication that’s been a staple for the airport, it’s board and crew. It’s an honor and I think we have one of the finest airports for a City our size in the United States. ”Holliman noted that the recognition would “without a doubt” increase the marketability of the airport and the community. “As people look at what we have to offer, and as we bring in new businesses and industries, and as current businesses and industries we have here fly in people, they’re going to find our airport is an all-weather airport,” he remarked.
Contact Us
Online Bill Pay
Agendas & Minutes
Employment
Map Services
Connect With Us