Municipal Airport Named State's Best
City officials were metaphorically on Cloud Nine when Mineral Wells Municipal Airport received the Airport of the Year Award Thursday night in Corpus Christi from the Texas Department of Transportation during its 25th annual conference.

Benefits to the Community of Mineral Wells
Bateman agreed that the award is beneficial towards promotion of the facility. He noted that they could put the recognition on the vehicles they use for advertising as well as on their website. City Manager Lance Howerton attended Thursday’s banquet along with Ed Weir, who’s on the airport board.“This is a very positive recognition for the airport and a positive recognition for the community as well,” Howerton said. 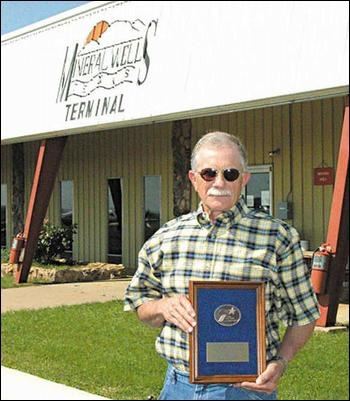 Premium General Aviation Airports in the State!
He added that the award reinforced the belief of many that are involved with the airport – from the airport staff, board, and City Council, among others – that Mineral Wells is one of the Premium General Aviation Airports in the State.“It’s quite an accomplishment, a great honor that’s the result of a lot of hard work …,” Howerton said. For more information and highlights on this event, view Airport of the Year Award, by Lacie Morrison.
Contact Us
Online Bill Pay
Agendas & Minutes
Employment
Map Services
Connect With Us